Electronic Circuits That Bend and Stretch

The new circuits, developed by a team of researchers at the University of Illinois at Urbana-Champaign led by Professor John A. Rogers, are built from ribbons of silicon only a few nanometers thick that are mounted on flexible plastic substrates.

SHRINK, WRAP: : This circuit sheet [LEFT] has not aged rapidly. The wrinkles make it possible to stretch the sheet over a sphere or an irregularly shaped object without breaking the sheet or damaging its current-conducting structures. To wrap circuits around a rod as thin as a strand of hair [RIGHT], the researchers made them superthin.
for more details click here
Posted by Raveendra Pai at 11:41 AM No comments:

Email ThisBlogThis!Share to TwitterShare to FacebookShare to Pinterest
Labels: Electronic Circuits That Bend and Stretch 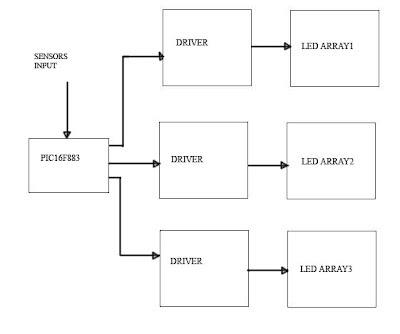 The block diagram explains the basic system design. Driver used is MAX 7219.The driver is controlled by a PIC (not necessarily PIC). The driver reduces complexity of work associated with the individual basia required for the LEDs. The driver however can drive 64 LEDs and conmsumes only 160mA at 5V. Thus its a great promise for the future lighting solutions. 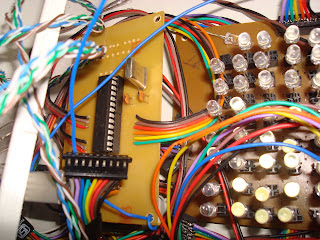 i-Room is a state-of-the-art, self-configuring lighting control system solution for bedrooms, offices and perimeter areas. Under automatic operation, the system senses luminosity inside and outside a room, dims the LED’s to maintain a prescribed level of illumination inside the room. i-Room is an smart system that saves energy by keeping unoccupied cells of a large room unlit and maximizing the use of available natural light inside the room. By operating on a feedback loop where the system senses light and the presence of people, the system makes smart decisions on how to best illuminate the space according to presence of people and control the brightness according to ambient light. The project is very expandable and versatile. The heart of the system is the state synthesizer PIC 16F883 which is an 8 bit CMOS microcontroller. The sensors of the system are LASER-LDR pair that is available and can be set up easily. In the long-run, i-Room provides control solutions that reduce energy costs and extend lamp life.

i-ROOM is a simplified version of systems and equipments sold at high prices in the high-income housing segment as well as high-visibility public buildings. With improvements, i-ROOM could also be used in architecture projects to enhance prototypes and models of buildings.

In the type of system of first category, each light source is provided with an automatic control device which includes a presence detector (e.g., a motion detector or a passive infra-red detector) and a light intensity detector (e.g., a photocell detector). In operation, each automatic control device functions to switch its corresponding light source on when an occupant is detected in its localized area of coverage and to vary the intensity (brightness) of the light produced by its corresponding light source in response to variations in the sensed ambient or background light level in its localized area of coverage. In this manner, adequate lighting is provided in all occupied areas despite variations in the ambient lighting conditions present in various zones of the room.

The automatic lighting control system of the second category developed includes a programmable microprocessor-based central controller which is responsive to feedback signals produced by a network of presence and light sensors distributed throughout various sections of a room to automatically control the light output levels of lighting units in different zones of the room. The system is equipped with an override feature to enable room occupants to override one or more of the automatic lighting features of the system, e.g., to enable the lights to be turned off, despite the sensed presence of people in a room. For example turning off lights for the operation of an overhead projector (OHP).

A more advanced automatic lighting control system of the second category includes a plurality of illumination sensors distributed throughout the building, but advantageously not necessarily in a one-to-one relationship to the light sources distributed throughout the room. In this connection, a generally lesser number of illumination sensors than light sources are strategically placed inside (and outside, if desired) of the room in order to provide a non-redundant set of measurements of internal illumination. These measurements are then collectively processed by a central automatic control device which preferably includes a neural network or a fuzzy logic unit. The automatic control device is programmed with a set of inference rules chosen to meet user-defined comfort and/or energy efficiency criteria. In operation, the automatic control device automatically controls the light output levels of the light sources throughout the room in accordance with the user-defined inference rules to thereby meet the user-defined comfort and/or energy efficiency criteria. Various user-selectable customized usage modes can be programmed to enable room occupants to vary the general lighting conditions in a selected or area(s) of the room in accordance with various usage requirements by merely selecting the appropriate usage mode desired by the occupants of the room.


The terms "room", and "light source" can be used in their broadest possible sense. For example, the term "room" can be intended to encompass any structure which has a lighting system, including, but not limited to, single-family homes, multi-family dwellings, apartment buildings, office buildings, warehouses, factories, gymnasiums, auditoriums, theaters, museums, shops, restaurants, hotels, shopping malls, and indoor stadiums. The term "room" is intended to encompass any identifiable, separately lighted portion, zone, sector, or localized area of a building, including, but not limited to, conventional rooms such as offices, bathrooms, closets, storage areas, factory floors, basements, conference rooms, foyers, common areas, utility rooms, or any associated set of such separately lighted portions or zones, sectors, or localized areas of the building whose lighting is intended to be commonly controlled. The term "light source" is intended to encompass not only individual lamps, but also any associated set or group of lamps which are intended to be commonly controlled, e.g., all of the lamps associated with a given room in the building.

Posted by Raveendra Pai at 1:17 AM No comments: